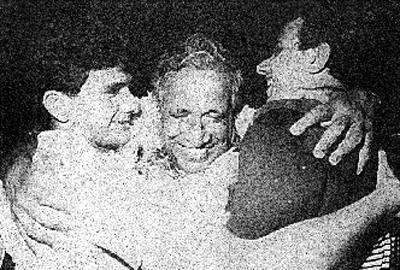 The press and crowd at the Raffles Institution counting centre had contradictory indications early yesterday morning of who would win the hotly-contested Anson seat.

At 12.30 a.m., Dr Yeo Ning Hong came out of the counting hall, raised his arm and said in an emotion-packed voice: “PAP.”

PAP supporters, taking this as a hint of the party’s victory in Anson, cheered wildly – “Anson, PAP, Anson, PAP”. They brought out a banner congratulating Mr Ng Pock Too.

A hush fell over the Workers’ Party camp, which had been cheering and chanting intermittently up to them.

Mr Jeyaretnam sported a worried frown, a sign that he was losing, said some. Others thought Mr Ng looked too grim.

At 12.37 a.m., Mr Peter Chua Chwee Huat, WP’s defeated candidate in Delta, emerged from the counting hall and flashed a “V” sign to supporters, telling them soon after that Mr Jeyaretnam was winning. The WP supporters went delirious and chanted: “We want Jeya.”

A hush fell on the PAP camp.

An hour later, WP chairman Wong Hong Toy, defeated in Radin Mas, arrived and used sign language to inform Mr Jeyaretnam through the glass door of the counting hall that he (Mr Wong) had lost.

But he declared soon after: “Mr Jeyaretnam has won Anson.”

Even as the WP camp was roaring, Mr Ng walked up to the counting hall door, smiled, and waved to the PAP crowd. But his was not a victory speech.

“Of course I am disappointed,” said Mr Ng to reporters later. “It is the choice of the voters in Anson who have to live with an opposition MP. I thank the voters who voted for me. I feel sorry for them.”

Asked whether he would continue to serve in Anson, Mr Ng said: “I think so”.

Asked about the shift in voting, he said: “I don’t think it is the work of the Workers’ Party that has influenced the voting pattern. I think we have to look in greater detail at the reasons why they voted this way.”

He spoke of a new course that the PAP would be taking to regain the lost parliamentary seats but did not elaborate.

He told his supporters: “You have done it again. We have won Anson back and we are going to get a lot more. So don’t worry.”

Asked whether his party would take up the offer of the one non-constituency MP seat left in Parliament, he said: “No, no, no.”