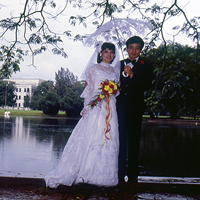 PHOTO COURTESY OF LOW THIA KHIANG
Mr Low and his wife Han Mui Keow returned to their alma mater Chung Cheng High School for their wedding photos. They met at the school and got married in 1982.

But he made a dramatic turnaround after a teacher took him under his wings.

The school was also where he met the girl who later became his wife.

Mr Low, who has been MP for Hougang since 1991 and is also the Workers’ Party secretary-general, is one of 41 former students featured in a book, written in Chinese, to mark the school’s 70th anniversary.

Mr Low, who lost his mother at a young age, had little interest in his studies.

A teacher once flung his school bag out of the classroom to make him come to his senses, but this did not change his attitude. His grades continued to lag behind those of his classmates.

His Secondary 2 results were so poor that his elder sister had to plead with the school principal for him not to be retained at the same level for another year.

Mr Low, now 52, is quoted in the article as saying: “I certainly was a problem student. I caused trouble during lessons, didn’t hand in my homework, came late to school, played truant and committed almost all the offences, big and small.

“Many teachers shook their heads when they saw me. They thought I was a hopeless case. Only my biology teacher, Mr Liao Rong Sheng, didn’t think so.”

Mr Liao was patient with him. He never lectured the boy. Instead, he would give him lifts home in his Volkswagen and chat with him along the way.

And when Mr Liao and his family went to the movies, he invited the boy to go along.

This teacher’s care for him made all the difference: He stopped being rebellious and bucked up in his studies.

His school days took on a different hue in his fifth year at Chung Cheng when a girl by the name of Han Mui Keow became his classmate.

He liked her but her seniors warned her that he was a bad hat. She was undeterred.

Nine years later, in 1982, they tied the knot and returned to their alma mater for their wedding picture.

Mr Low went on to teach at Pei Dao Secondary School and later became the supervisor of a commercial school.

His wife is now a housewife while he runs a signage business.

He said: “I especially cherish the school’s philosophy of excellence of education for all kinds of people. Without that, my life would not have turned out for the better.”

Posted in 2009 06. Comments Off on Sunday Times: Once a problem child, MP changed ways in Chung Cheng