They’re young & have cushy jobs. But these newbies from the Workers’ Party are going into politics 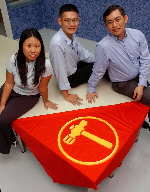 HE’S a legal eagle by day, a martial-arts instructor by night, and an opposition activist on weekends.

Mr Chia switched camps from the PAP four years ago. He is one of the young professionals the Workers’ Party (WP) claims is rising through its ranks.

But you’d hardly think of him as a “political animal” at first glance.

When The New Paper caught up with Mr Chia and two of his party colleagues at WP’s six-month-old headquarters in Syed Alwi Road, all could’ve passed off easily as your typical Shenton Way yuppies. Except for their non-typical political affiliations.

Mr Chia, for starters, had signed up as a card-carrying WP member last April, and is now a coordinator for the party’s youth wing.

But before the last elections in November 2001, this same man was shaking hands with residents on behalf of PAP MPs at Meet-the-People sessions, as a member of Young PAP.

“I didn’t find any motivation to add to the strength of a party that was already strong,” said Mr Chia, who resigned from Young PAP after one year of membership.

Helping MPs to draft letters to residents, he said, had given him a good feel of some “real hardships on the ground”.

When he crossed over to the other side, it was accompanied by the expected barrage from family and friends. “Of course, there was some resistance and some concern,” he said, referring to past opposition members who got into trouble.

“But I convinced them I knew what I was doing. You can still challenge the Government intelligently without resorting to name-calling.”

His most recent duty?

Speaking during WP’s “public consultation exercise” yesterday on Singapore’s casino debate. The party wants the casino decision to be put off till the next General Election, so that people can decide on the issue at the ballot box.

Joining Mr Chia at the podium was Mr Goh Meng Seng, 35, an IT businessman and father of one, not to mention a disgruntled “Cheng San voter”.

Yes, that Cheng San. The hottest battleground during the January 1997 elections. Then, a five-man PAP slate, led by the then Education Minister Lee Yock Suan, eventually won by a narrow 54.8 per cent over a WP team which included former activists J B Jeyaretnam and Tang Liang Hong.

To take into account demographic changes, the Electoral Boundaries Review Committee later dissolved the GRC before the 2001 polls and subsumed it into other areas.

“Suddenly, my own constituency disappeared,” said a still-smarting Mr Goh.

He even laid down this challenge to his political rivals: “I would welcome any chance to debate the PAP – on any issue.”

Just smoke or is there true fire in their bellies?

When The New Paper asked if they’d put their money where their mouths are and contest the next elections to win a place in Parliament, their guard came up.

“It’s up to the party to choose. If it decides someone else is better qualified to stand, then let that person be the candidate,” said Mr Chia.

Miss Lee, 26, a writer for a company newsletter, now sits on the WP’s executive council. She has been active with grassroots work and youth recruitment in Hougang since joining the party in 2002.

“I never thought of myself as politically inclined,” the oldest of three siblings said with a grin.

“Just before I joined, my MP, Mr Low even visited my parents to assure them everything will be okay.”

“Mr Low” is none other than WP Secretary-General Low Thia Khiang, who has held his seat in Hougang since 1991.

As expected, all three WP newbies were most animated when describing their long-term “mission” to foster more “political competition” here. But, as possible fresh faces who will be held before voters to win their trust come GE time, how do they really rate their chances?

About WP’s electoral performance, he added. 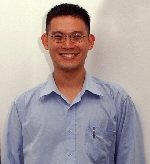 I CONVINCED THEM I KNEW WHAT I WAS DOING. YOU CAN STILL CHALLENGE THE GOVERNMENT INTELLIGENTLY WITHOUT RESORTING TO NAME-CALLING.
– Mr Chia Ti Lik, on family and friends who didn’t approve of his political activism

THE name of the game: Recruiting youths.

And local political parties are playing to win, and win it well.

Young PAP, the ruling party’s youth wing, now boasts a membership base of over 6,000, with average age down from 35 five years ago to the current 33. Its newly-unveiled list of events even includes its second “YP School” later this month – a two-day leadership training course to groom new blood.

In April, it’s also putting together a “Recruitment Night”, an “Induction Programme” and a workshop entitled “Discussion on Possible Election Issues”.

What should we read into all this?

Well, at last December’s PAP 50th anniversary rally, PM Lee had said: “I can tell you we have invited a lot of people to tea… and we’ve got some promising names.

“And I think when we call the election – not soon – but when we (do), you can be sure we’re going to field a strong team.”

Its opponents have sat up and taken notice.

Take the Workers’ Party (WP). Whether an early election happens or not, it clearly doesn’t want to be caught napping.

Since the start of this year, according to WP’s website, it’s revived its weekly house-to-house “public outreach” programme – something it hasn’t done on a large scale since last August.

So far this year, its members have walked the ground and knocked on doors over seven separate Sundays – with the eighth to be held this morning at Hougang Avenue 8. A big leap from 2004, which saw only 22 such exercises for the entire year.

The party’s targets – Aljunied, East Coast and Jalan Besar GRCs, plus the single seats of Nee Soon East and of course, Hougang.

“A significant increase in new members in their 20s and 30s joining us since the 2001 elections,” party chairman Sylvia Lim, 39, told The New Paper.

She doesn’t want to give absolute figures, but says that because of the youth influx, the average age of WP members has come down.

The party’s Youth Action Committee also claims it has signed up more yuppies who “worked or studied overseas”.

A key strategy: Using popular sports like soccer and basketball to hook the young, then talent-spotting the committed ones and channelling them into grassroots projects.

The four-party Singapore Democratic Alliance, on the other hand, declined to comment on its activities. But based on anecdotal evidence and past reports, it seems the SDA’s been active in Bukit Timah, Chua Chu Kang, Potong Pasir and Tampines in recent months.

“They can delay the decision so that Singaporeans have a chance to express themselves at the ballot box,” added the Workers’ Party chief, questioning the Government’s plan to announce its stand next month.

He spoke to the media after a forum on the casino issue organised by the WP at its headquarters in Syed Alwi Road.

His call for the Government to put the casino issue to the vote first surfaced during the 2 1/2-hour forum. Mr Low’s challenge comes days after Prime Minister Lee Hsien Loong put his foot down on allowing Singaporeans to vote on the issue.

During last week’s Budget debate, Mr Lee rejected a proposal to put the matter to a referendum, and another calling for the Party Whip to be lifted to allow ruling party MPs to vote freely.

His reason: It is a policy matter, not an issue of “national survival or sovereignty”, nor of “conscience or fundamental principle”.

But, Mr Low told reporters that it is not a simple policy matter. “I believe if it is a normal policy issue, you won’t usually have a split in the Cabinet,” he said.

“The decision will have some fundamental implications for our society. If it is just a simple policy issue, they could’ve just gone ahead,” he added, pointing to the extensive consultations the Government has initiated.

Asked for his own stand on the casino issue, Mr Low said that it is better for Singapore not to have a casino.

Saying that he looked at the issue in a “pragmatic” way, he felt that there are just too many unknowns in the benefits and pitfalls, especially in the long-term, to take the risk.

“Many people are not very sure whether the impact will be adverse, not just in this generation, but in the future. When it’s too late, there’ll be no return.”

Yesterday’s forum was attended by about 40 people.

Mr Rahizan called for MPs – especially the Malay-Muslim MPs – to state openly their stand on the issue and vote accordingly in Parliament.

Mr Chia, who believes that the Government has already decided in favour of a casino, said Singaporeans should focus on “pressing” it to channel the casino spin-offs into tax cuts.

Others were worried that, in the absence of other quality attractions, the casino might become Singapore’s tourism icon – and sully its image.

A paper based on the forum, plus other feedback the party has collected, will be presented to WP’s central executive committee (CEC) ahead of its meeting on April 5, said WP second secretary-general James Gomez, who chaired the forum.

In his opening remarks, Mr Gomez said that views within the party’s CEC are varied. When asked, he declined to elaborate on if it meant that there was a split.

The party will announce its formal position before the Government decision is announced in mid-April.