MR J. B. JEYARETNAM, Anson’s MP-elect, yesterday served notice that grassroots organisations in the constituency were in for a revamp.

He said: “I’m not going to inherit them in their present form. I am going to try and make them more representative of the people.”

And what he hopes to encourage are committees elected by the residents they serve, not appointed by the powers that be.

“I have heard a lot of complaints from the constituents about the residents’ committees, for instance, about the manner of appointment, how they are run and supervised. It is all stage-managed,” he said.

My Jeyaretnam stressed that he believed in the need for residents to participate in community development but “what I want is real community participation, not an order from above saying ‘you will come and sit and serve on this committee.'”

On the issue of securing premises for the Workers’ Party to meet his constituents, he said he would be writing to the Housing Board to ask: “Well, what about making an office available for the MP for Anson now?”

“I believe the problem of getting premises will ease up. They could go on ignoring us in the past but now things are different,” he added.

On the prospect of Mr Jeyaretnam having an office in Anson and his statement that he wanted Anson residents to have the final say in the election of residents’ committees, Dr Yeo Ning Hong, the Minister of State for Defence, said Mr Jeyaretnam could make all the claims he could think of.

“The committees are appointed by the Prime Minister’s Office. The existing ones will continue to serve the people but you must remember that they are all volunteers,” said Dr Yeo, who accompanied the defeated PAP candidate, Mr Pang Kim Hin on a “thank you” tour of the constituency.

Asked about the future of the PAP’s Education Centre in Jalan Bukit Merah, which the Housing Board said was leased to the former MP for Anson, Mr C. V. Devan Nair, Dr Yeo replied that the party would have to study its agreement with the board. 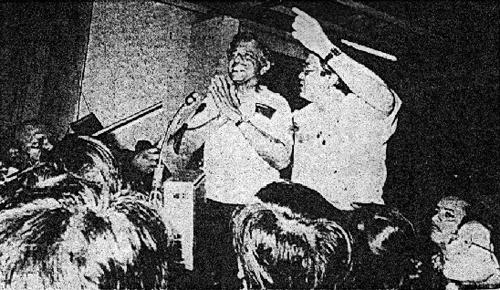 MR J. B. Jeyaretnam’s long cherished dream of winning a seat in Parliament came true last night when he won the Anson by-election by a margin of 653 votes.

The third candidate, United People’s Front general secretary Harbans Singh, managed only 131 votes and, as this was way below the required one eighth of votes cast, or 1,688 votes, he lost his deposit. There were 244 spoilt ballots.

With his victory, the Workers’ Party secretary general, a sixth-time contender who first began his electoral quest in 1972, became the first man since 1963 to beat the PAP at the polls.

This was the second time the people of Anson chose a WP leader to represent them – they last did so in 1961 by giving Mr David Marshall, now Singapore’s Ambassador to France, a margin of 546 votes over the PAP’s Mr Mahmud Awang.

Victory for Mr Jeyaretnam, who arrived at the counting centre in Gan Eng Seng School at about 9.25 p.m., was announced by the Returning Officer, Mr Richard Lau, at precisely 10.53 p.m. after a recount.

It sent WP supporters who had thronged the school compound since about 8 p.m. wild with jubilation. They cheered and waved the WP banners they had brought with them.

An overwhelmed Mr Jeyaretnam, red-eyed and voice choking with emotion, told them: “This victory is yours. It is not mine. It is the people’s victory against the might of the PAP and all the government agencies.

“In the face of all this, I feel very, very humble. I thank God for answering the prayers not only of myself but also the hundreds of thousands of Singaporeans.”

Then in a tender reference to his late wife, Margaret, who died last year, he said: “This is also my saddest moment. One person who has fought for your cause as fiercely as I did is not here.”

“But I know that although she is not here physically, she is here in spirit. I’m sure she will rejoice tonight, seeing you all here cheering me.”

Then he asked for his son, Philip Anthony, to join him and the WP chairman, Mr Wong Hong Toy, on the dals used by Mr Lau to announce the results. “We’ve won, son,” he said softly to the 17-year-old boy, and then hugged him.

They remained in silent embrace for a full five minutes. Then Mr Wong joined in and put his arms around both of them.