New Paper: WP’s Dr Poh: Got money, give money. Got energy, give energy 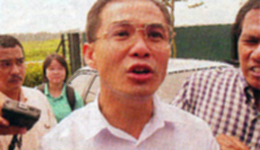 He said he spent his youth in Nee Soon.

Indeed, some people at the Workers’ Party rallies can be heard shouting for “Ah Poh! Ah Poh!”

Dr Poh was made the assistant secretary-general of the WP in May this year, almost as soon as he joined the party.

He himself admitted that his grassroots experience is “very limited”. This is his first foray into politics.

On Oct 26, a day after Nomination Day, Dr Poh went for a walkabout in Hougang with enthusiasm. Shaking hands with fishmongers and the elderly, he appeared to be at ease with the residents.

His reasoning: “I am the man-on-the-street. They are my elders and my peers, and I am one of them.”

He reaches out to the coffeeshop and market folk with his fluent Hokkien.

His oft-repeated belief is: “The country and constituency is ours. There is only one Singapore between us. Got money, give money. Got energy, give energy.”

Then there are the three Hokkien maxims his father, 60, a retired lorry driver, had taught him since he was a boy.

Maybe this is why he shies away from giving any comments about his competitor in the single-seat ward Nee Soon East, Associate Professor Ho Peng Kee.

“He is a friendly competitor,” that’s all he said.

Dr Poh obtained his Business Administration doctorate from the University of Southern Queensland (Australia) in May this year.

He feels his specialty in “knowledge management and creation” would “effectively contribute to the development of policies to strengthen our economic competitiveness”. He said he decided to join the WP because he and Mr Low Thia Khiang, the party secretary-general, whom he has known for almost five years, “share the same values”.

He said: “I am very comfortable with his rules of engagement – responsible and constructive politics.”

Dr Poh is married, and has a 4 1/2-year-old son. The family lives in an HDB flat in Woodlands.

WHEN he first said he was contesting the elections, it turned out to be an April Fool’s joke.

But, it seemed that political activist James Gomez (picture) was serious this time around when he was announced as a new candidate of the Workers’ Party.

And, the word was that he would help to realise his party’s dream of winning a GRC.

He had also coined the catchy phrase “New Poor” which was set to be his campaign platform.

All this came to an end yesterday, when the nomination papers that he and his fellow candidates who were vying for the Aljunied GRC were rejected on technical grounds. It was the only team the Opposition had fielded for a GRC that was rejected.

Explaining this, Returning Officer Tan Boon Huat of the Elections Department said the papers were invalid because when delivered, they contained blanks where the candidates were required to state the electoral division they were qualified to stand in.

WP’s secretary-general, Mr Low Thia Khiang, called it “an oversight” and took “full responsibility” for it.

Mr Gomez told reporters how they had tried to remedy the situation by writing in the electoral division that they were standing in. But, this was rejected because they had to be reaffirmed before a Commissioner of Oaths. Mr Gomez criticised the stringent electoral process.

“We wanted to remedy on the spot … we called a lawyer who is a Commissioner of Oaths to rush down,” said Mr Gomez.

But, he said, it was already 12.20pm and the Returning Officer declined his request to extend the deadline.

Mr Tan said: “Everyone knows that they have 11 to 12 o’clock to file the proper documents, there’s no leeway for extension,” he said.

Mr Gomez said “the whole process of recourse was absent”.

Here again, the law is clear. Mr Tan said that returning officers, by law, cannot advise candidates on how to fill out their nomination forms.

When TODAY pointed out that if the candidates were serious enough, they should also double-check that their papers are in order, Mr Low said: “We do … nevertheless, this is an oversight.”

“We have done our best but we are not perfect,” said Mr Low who had sent a letter of appeal to the Elections Department.

On this, Mr Tan said: “I (had) replied saying that I had no powers to entertain any appeal.”

So, was it a last-minute decision to contest in Aljunied, thereby explaining the blank space in the declaration form?

“It is not a last-minute decision at all,” said Mr Low, and raising his voice, he added: “Certainly it was not made this morning.”

When asked for his comment at a separate press conference, Prime Minister Goh Chok Tong said: “I don’t know the whole story but I found the whole team was disqualified. I don’t know if it’s another of those April Fool’s jokes.” 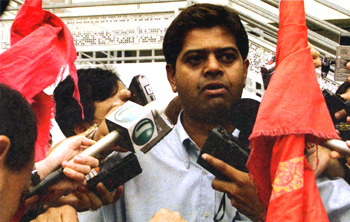 WORKERS’ Party candidate James Gomez (picture) and his team turned up to file nomination papers for the Aljunied GRC but ended up conceding a walkover to the PAP.

WP chief Low Thia Khiang said his party had to pull out because of a technicality – the candidates had not entered the name of the electoral division on their nomination forms.

According to an elections department official, the nomination papers submitted by the WP were not delivered in compliance with the law.

TODAY: What the political parties promise …

1. People who have to contend with increasing high costs of living and are relatively poor.

2. These people include the unemployed, people in low-paid or part-time employment, struggling local entrepreneurs, the sick and disabled, older people and a sizeable portion of the middle-class

4. Young and elderly Singaporeans will have to contend with foreign workers in the job market. WP chief Low Thia Khiang calls for a more stringent foreign talent policy

5. Companies suffering from poor business have to down size and relocate to lower cost places like China and Third World countries.